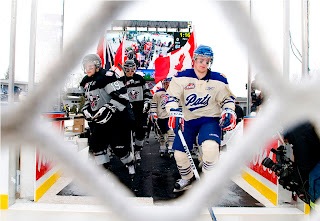 The Regina Pats skated to a 3-2 win over the host Calgary Hitmen in front of a CHL record crowd of 20,888 fans who took in Monday’s WHL Outdoors game at McMahon Stadium.

Chandler Stephenson scored the back-breaking goal with 36.5 seconds left in the third period to lead the Pats (21-32-6-2) to a hard-fought victory.

“Steph had the magic stick tonight,” said Pats coach Curtis Hunt, who credited Regina goalie Damien Ketlo and Calgary netminder Mike Snider for playing well in the contest. “Both goaltenders made some terrific saves throughout it.”

The conditions for the first-ever outdoor CHL contest played in Canada were perfect with temperatures hovering around 0 °C for the afternoon affair, although the wind chill made if feel quite a bit colder.

The game set a new Canadian Hockey League attendance record as 20,888 fans took in the outdoor affair. It broke the CHL attendance record of 20,081 set on Dec. 20, 2004 during a game between the Ottawa 67’s and Kingston Frontenacs at Ottawa’s Corel Centre (now Scotiabank Place).

“We’ve got to walk away and know that we were part of something special,” Foucault said. “We set a record for fans and we've got to thank our fans for that. It was a special experience and we're happy to play in it.”

The attendance also surpassed the largest junior hockey crowd of 20,380 that took in the gold medal game at the 2009 world junior hockey championships between Canada and Sweden at the Corel Centre.

“It’s special to be part of it,” said Hunt. “The whole weekend was fantastic. I’m very appreciative that we had the opportunity as an organization. Just looking around at the tremendous amount of work that went into it really makes you feel humble. I’m just glad our guys were able to get the win.”