Battle for the Ages 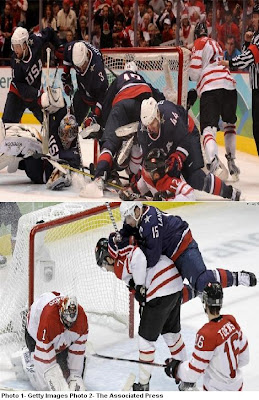 Sunday, fans were treated with a game that was full of action in front of the net as both goaltenders combined for 75 shots against.

Similar to a Stanley Cup final, but with a whole nation on your side, both goaltenders withstood the pressure and managed to not breakdown when the opposition attacked the net at full throttle.

Ryan Miller was credited by many as the goaltender and MVP of the tournament. Roberto Luongo was seen as Team Canada's savior as he made numerous key saves throughout the Olympics and in the gold medal game. With the crowd chanting "Luooo" when he received his gold medal he couldn't help but smile.

GDI Prairies would like to congratulate both goaltenders on an excellent performance in the Olympics.

To see an in depth look at the shot chart and the statistics of the game click here.

Also, a full article on Luongo and Miller can be viewed here.