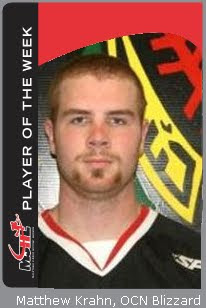 OCN Blizzardremain the lone undefeated team in the MJHL, thanks to the outstanding play of goaltender Matt Krahn, who has been named Player of the Week.

Krahn, who hails from Winnipeg, allowed only three goals on 85 shots in 125 minutes of action last week. The 6-foot-1, 19-year-old ‘tender owns a 4-0 record and has been a key figure in the Blizzard’s undefeated streak.

Blizzard sit atop the tight Sher-Wood Division with an unblemished 8-0 record.

Runners-up for the MJHL Player of the Week award include Jason Kasdorf of the Portage Terriers.

Kasdorf, 18, has also been stellar in the Terriers’ net, reflected in his 2-0 record and 1.44 GAA in 125 minutes worked last week. A native of Winnipeg, Kasdorf takes up a lot of the net, standing 6-foot-4. To date, his overall record is 3-2-1 for the Terriers who sit third in the Sher-Wood Division with 13 points.

To view more on this visit the MJHL here.