Bobby Luo Has the Night of His Life 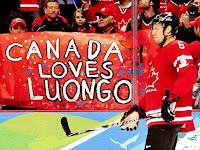 Reported After the game, {Roberto Luongo was asked to describe the final couple of minutes of Team Canada's semifinal against the Slovaks.
"Fun," he said. "It was a lot of fun."
Fun? Friday night was fun?
"It was the most fun I've ever had," he said. }

As Luongo had fun making several saves that may be credited as the biggest stops he has ever made, the nation of Canada was full of emotions leading to the final buzzer to conclude the game. To view the full article click here.

The sounds of fans chanting "Luuuuoooo" will continue as the Gold Rush starts this Sunday! Go Canada Go!