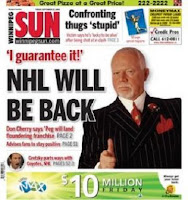 After all the talk over the past several months, one of Canada's greatest Canadian's insights many with his support towards Winnipeg getting their team back.

Don Cherry is willing to back his claim that Winnipeg can support an NHL franchise by putting up his own cash.

Interviewed by two Canadian radio stations on Thursday, Hockey Night in Canada's colourful commentator said he'd purchase a piece of the club if approached by a prospective ownership group.

"Yes, it's a winner," Cherry told the Fan 590 all-sports radio station in Toronto. "I'd be happy to invest."

Fans had their hopes raised ever since news broke that the NHL was considering a move back to Winnipeg should the league fail to find a buyer willing to keep the hockey team in Phoenix.

Cherry, however, doesn't see a future in Phoenix and is amazed the NHL continues to support the idea of having a team in the desert.

"It's an endless pit out there," he said.