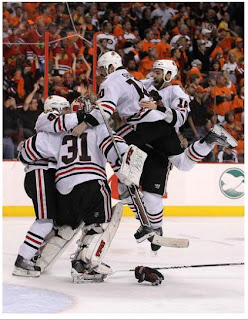 Early into Overtime, Chicago's Patrick Kane released a surprising goal-line shot towards the far corner of the net. Without hesitation of knowing if he had scored, he leaped for joy in a triumphant celebration as he became the hero in game 6 to bring the Blackhawks to the 2010 Stanley Cup victory.


A big congrats to Winnipeg's hometown hero Jonathan Toews for hoisting the cup, along with being awarded the playoff MVP - Conn Smythe Trophy.

This may just sum it up as quoted from - The Associated Press, "There's so many great things about winning a Stanley Cup. This is it," Toews said. "This is the best feeling you can ever get. I just can't believe it's happened."