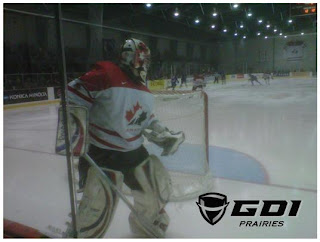 GDI Prairies trained Andy Desautels was solid in net for Team West on Sunday evening with a 4-1 Win against Slovakia.

Desautels shut down the Slovak's stopping 28 of 29 shots as he played maturely in net. Throughout the game he showed a strong focus on controlling a high percentage of shots with his body, shifting towards many chances in tight, and also helped Team West's offense sending many pucks up ice to help transition a quick rush.

Training with GDI diligently for the past several years and also helping instruct young goaltender out of Regina, Desautels has built up a solid foundation and resume to help lead him with a successful future in net. For the 2010/2011 season he is rostered with the Regina Pat Canadians out of Saskatchewan's AAA Midget League, and also on an Educational Contract with the WHL's Everett Silvertips.