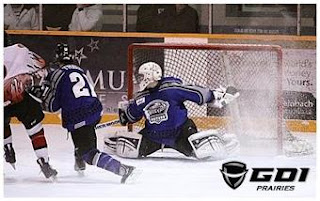 The Steinbach Pistons hosted the Waywayseecappo Wolverines on Friday night in Steinbach, and made history with a 3-0 win.

With starting goaltender Addison Herosian not able to play because of sickness, the Pistons called up Brenden Edie from the Eastman Selects.

Edie, who has been playing for the Eastman Selects, stopped all 34 shots for the shutout in his first ever MJHL game. The shutout was also the first for the Pistons franchise since moving to Steinbach last year.

Edie has continually looked to raise his standards of play in net, and with his first junior start it shows his strong character of aiming for nothing but the best. Keep up the hard work!

The Pistons next game takes place this Sunday, February 13th against the OCN Blizzard in Steinbach.