Fiebs Gets the Call to P.A 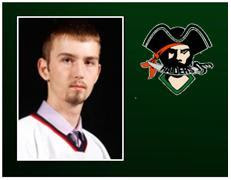 The Prince Albert Raiders have announced Monday that they will be recalling GDI trained goaltender Brendan Fiebelkorn.

19 year-old Jamie Tucker suffered a laceration to the thumb of his blocker hand during the Raiders game on Saturday in Regina and is week to week.

Fieb's was the Raiders 4th round selection, 78th overall in the 2009 WHL Bantam Draft. He has appeared in 18 games for the league leading Winnipeg Hawks this season with a 13-0-2 record, 2 shutouts and a 2.27 goals against average.