Ford ECHL All-Star and Goaltender of the month for December 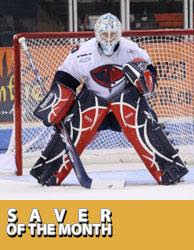 GDI Goaltender and On ice Instructor Todd Ford recently was credited as being named the ECHL Goaltender of the Month for December. Along with this award, Ford was voted to be the starting goaltender for the American Conference in the 2010 ECHL All-Star Game.

GDI Prairies would like to congratulate Ford with his success this season, and wish him the best during this upcoming playoffs.

Selected in the third round (74th overall) by Toronto in the 2002 National Hockey League Entry Draft and currently on loan to the Texas Stars of the American Hockey League, the Calgary, Alberta native is 16-6-1 and leads the league in wins while he is second with 690 saves and tied for second with 1,416 minutes.