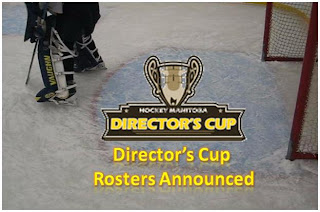 The 2011 Directors Cup is set as a developmental tournament to introduce athletes to the concept of the Program of Excellence (U-16 & U-17), which is Hockey Manitoba's high performance athlete identification and training program for Canada's National Teams (U-18, U-20). The objective of this program is to provide some of the province's top skilled players an opportunity to compete amongst their peer group in a high-level & prestige event.

Each Hockey Manitoba Region has representation at the Director's Cup with 9 Rural Region teams and 3 Winnipeg teams competing in a 12 team draw. This years tournament will be held out of the communities at Morris and Rosenort.


The following GDI goaltenders were recently selected to their Director's Cup teams: