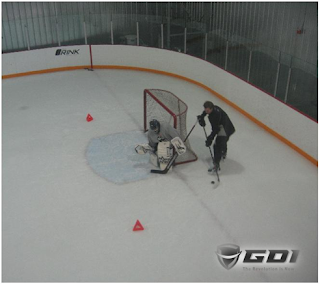 Today's clinic was on Net Play & VH. Key developmental points revolved around having an approach that was initiated by one's visual attachment, ice awareness, and save response time. With constant repetition and instructional feedback, each goaltender developed a more defined approach to the techniques used in surrounding areas in tight to the net.

With this Sunday Power Hour based around net play, a large focus was implemented towards establishing ice awareness. Due to the fact that teams are using systems to combat set plays from the corners going north-south and also behind the net moving east-west, it is important that a goaltenders game has a correlation between ice awareness and zone awareness.

For example, when a goaltender retreats to their post as the play transitions to the corner they must be aware off the puck carrier but also of the possible pass options that may create scoring chances. On top of this it is important to understand where these threats are based on the ice, which will relate to how the goaltender must respond and react to them as they approach and as they happen.

In relation to today's clinic on Net Play & VH Transitions, two nights ago on December 3rd, Luongo made two great stops in-tight to deny Chicago - Displaying an excellent response within two different zones of the ice. Luo shows a great sense of patience, and compactness within his stance and low mobility in net. Take a look below.

Luongo has been in relation for over several years with GDI through pro consulting, first being trained through the World Juniors at a young age before being drafted to the NHL's New York Islanders fourth overall.