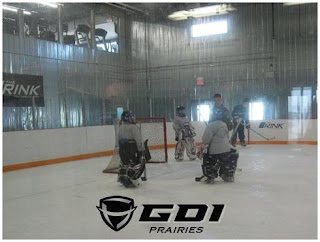 Yesterday's clinic had a strict focus on pass-outs. Key developmental points revolved around having an approach that was initiated by one's ice awareness and save response time. With constant repetition and instructional feedback, each goaltender developed a more defined approach to the techniques used in the various zones of the ice that correlate to corner pass-outs.

With this Sunday Power Hour based around a goaltenders net play, a large focus was implemented towards establishing ice awareness. Due to the fact that teams are using systems to combat set plays from the corners going north-south and also behind the net moving east-west, it is important that a goaltenders game has a correlation between ice awareness and zone awareness.

For example, when a goaltender retreats to their post as the play transitions to the corner they must be aware off the puck carrier but also of the possible pass options that may create scoring chances. On top of this it is important to understand where these threats are based on the ice, which will relate to how the goaltender must respond and react to them as they approach and as they happen.

Key points to remember on pass-outs from the corner are:

1. Proper post-integration must be established immediately upon arrival to the post
2. Use of one's peripherals will help aid in having early eyes on possible net-front threats
3. Understand the zones of the ice where the approaching players are and if they are stationary or in full-pursuit on net
4. After establishing awareness of the puck carriers options, backside skate adjustments can be made to manage one's positional movement if the pass is made
5. Approach the pass out with the intention of maintaining perfect body position on the puck when transitioning from A to B.


In relation to yesterday's clinic on Passouts, two nights ago on January 22nd, goaltender Braden Holtby makes a number of big stops near the end of the game, including a great gloves save to rob Tyler Bozak. Holtby made two great stops in-tight to deny Toronto - Displaying an excellent ability to judge the possible threats in front of the net by adjusting his skates, and also showing a great deal of athleticism to make a game saving stop. Take a look below.