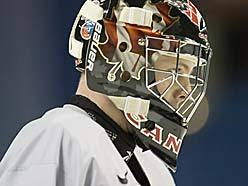 With the Nation on his shoulders, Mark Visentin stepped up and handled the pressure. With this said, goaltenders should take note on two key aspects: 1) Make the best of your opportunities 2) Under pressure, remember your strengths.

Visentin had been in the passenger seat early on in first year of Junior hockey. Being in a similar scenario with Team Canada, he took the tournament in steps, day by day, until he got his chance.

BUFFALO -- Mark Visentin and Dmitri Shikin weren't in net when the world junior tournament started on Boxing Day, which, at the moment, feels like ages ago.

But they're both in there now.

Neither was the original go-to guy for his team, but both are in that position with the gold medal on the line Wednesday night at HSBC Arena.

The Canadian net was supposed to belong to Olivier Roy, who's been groomed for this opportunity since he was 16 and is a year older than Visentin.

But when Roy lost the preliminary-round shootout to Sweden's Robin Lehner last Friday, Canadian coach Dave Cameron turned it over to Visentin, the Phoenix Coyotes first-rounder and Niagara IceDogs puckstopper who was so steady in the semifinal win over the United States.

The Russian crease was the property of big Anaheim Ducks' pick Igor Bobkov, a London Knights goalie, until Canada beat him six times on Boxing Day. The much smaller Shikin got a chance and he's shone ever since, including beating Lehner, the huge Ottawa Senators prospect, in a semifinal shootout.

But that's the way it has gone lately -- especially in Canada -- with the hockey tournaments that matter most to us.

The guy first handed the steering wheel isn't driving the bus by the end of it.