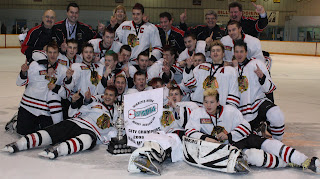 It was the closest game of the best of five final series, but the Hawks looked just as strong in the 4-3 game three victory as they did in the first two games. The win on Sunday night completed a three game sweep of the finals for the City Midget Hawks.

The Monarchs fell 5-0 in game one and 5-2 in game two before eventually dropping game three to the top seeded Hawks. The championship title caps off an impressive season for the Hawks during which they lost just six times during league play and had a total of 30 wins. 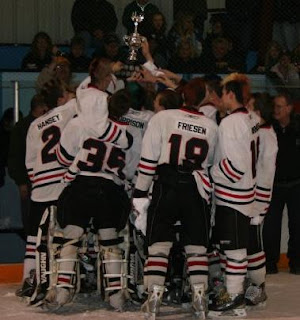 The Hawks goaltender tandem of Brenden Fiebelkorn and Alex Henry maintained a solid league-best 2.19 Goals Against Average, and helped their team accomplish an impressive 16 game winning streak midway through the season from November to January. 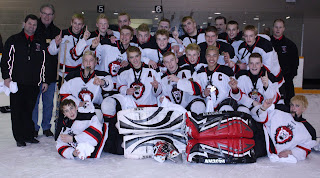 Bantam I Monarchs triumphed over the Warriors to take their league final. The Monarchs will now travel to Thompson, MB for the Provincial final four tournament March 26th- 28th. The winner of the Provincials will move on to the Western Canadian Bantam Championships in Burnaby, BC. Congrats to both Ryan Miner and Tyler Dodd who helped tend goal to lead their team to the championship win. Best of luck in Thompson! 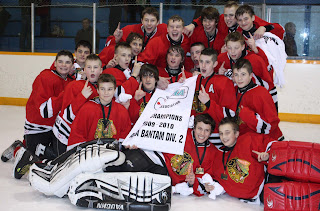 The Bantam 2 AAA Hawks who lead the league with 23 wins, 5 loses, and 2 shootout loses capped off their playoff win by winning an outstanding 8 straight games, sweeping both series, to claim their league championship. Congrats to both goaltenders from the team, Zach Hoger and Troy Martyniuk, who manged to only allow 72 goals against in the high scoring Minor Bantam league.