"He Gives Us a Chance to Win Every Night" 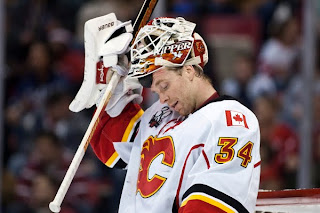 CALGARY - Miikka Kiprusoff did something that hasn't been done in 25 years to help the Calgary Flames improve their playoff position.

Kiprusoff stopped a pair of penalty shots and made 37 saves in total to help the Flames (34-24-9) to a 4-3 win over the Columbus Blue Jackets on Friday.

The Flames passed three teams and moved into fifth spot in the Western Conference standings with the win.

"He gives us a chance to win every night," said Flames forward Olli Jokinen, who had a goal and an assist. "You can see how focused he is every day. He's the biggest reason we've been winning games."

Starting his 19th straight game, Kiprusoff stopped penalty shots by Matt Calvert in the second period and Antoine Vermette in the third.

"There's nothing you can do," said Kiprusoff in regards to the rare occurrence. "You just have to make sure you stop it."

It's the first time a goalie has turned aside two penalty shots in one NHL game since Detroit Red Wings goalie Corrado Micalef stopped both Pierre Larouche and Mike Ridley of the New York Rangers on Feb. 16, 1986. The Rangers won that game 3-1.

"That's definitely not history you want to be a part of," said Calvert. "He got me on that one. I was trying to go shelf and trying to get him to move, but he read it pretty good and stayed in one spot and I didn't have much to shoot at."

Curtis Glencross had a goal and two assists and Rene Bourque had a goal and an assist for Calgary, while captain Jarome Iginla scored his 29th goal of the season. Iginla is looking to become the 10th player in NHL history to compile 10 seasons of at least 30 goals.

But the talk of the Flames locker-room was Kiprusoff.

"He made two great saves on two penalty shots," Glencross said. "Kipper stuck in there for us and played another great game."

Vermette had a goal and an assist for the Blue Jackets (31-26-7), who have lost four straight games to fall to 12th spot in the West. Craig Rivet and Jan Hejda also scored, while Jakub Voracek had two assists. Columbus netminder Steve Mason made 24 saves.

The Blue Jackets have failed to score on five penalty shots this season, including four in the last five games alone. R.J. Umberger missed on a penalty shot in a 4-2 loss to Edmonton on Thursday.

"You get that many penalty shots like we have in the last little stretch here, you'd think sooner or later the odds are that you're going to score on it, but we'll just keep working at it," said Columbus coach Scott Arniel.

Trailing 4-2 after two periods, the Blue Jackets outshot the Flames 16-4 in the final frame.

"If you're going to try and make it to the next level and get to the playoffs, you have to find a way to beat these guys and we had more than our share of opportunities to equal that game tonight," Arniel said. "We peppered them pretty good in the third."

Vermette swatted a rebound past Kiprusoff to tie the game 2-2 at 1:53 of the second before taking a penalty that would prove costly.

The Flames then went on an extended power play when Vermette took a double minor for high-sticking Calgary forward David Moss.

"Obviously, it's an accident," Vermette said. "This time of year, it makes a difference—penalty killing and power play—and they capitalized on that."

After Bourque backhanded a rebound past Mason to put Calgary up 3-2, Glencross tipped in a point shot by Anton Babchuk to give the Flames two power-play goals in 81 seconds.

"That's the ultimate goal when you get a four-minute power play, try to get one in the first half so you can have another second chance," Glencross said. "We were lucky enough to get two out of it."

Calvert was awarded his penalty when he was hauled down from behind by Calgary defenceman Mark Giordano, but Kiprusoff made a blocker save to keep the Flames up by a pair heading to the third.

Columbus made it 4-3 at 6:43 of the final period as Hejda blasted a point shot through traffic into the top corner behind Kiprusoff.

Vermette had a chance to tie the game when he was awarded his penalty shot after Babchuk was ruled to have thrown his stick trying to break up the play, much to the dismay of the Calgary players, coaching staff and hometown fans.

"I don't think they were too happy about that call, but after it's made there's nothing you can do about it," said Kiprusoff, who made a save with his left arm to thwart Vermette's opportunity. "The only thing is try to stop it and I'm happy I was able to do it tonight."