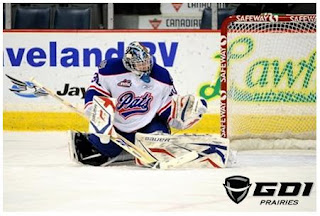 On Wednesday evening the Saskatoon Blades traveled to Regina to take on the Pats.

As the Blades peppered the Regina Pats with 62 shots, Pats goaltender Matt Hewitt helped hold the Blades to just three goals - leading his team to a 4 - 3 shootout victory.

Hewitt allowed just one goal against seven powerplay chances, and shut down all four chances in overtime that he faced against the number one ranked WHL team.

Regina's Leader-Post caught up with Hewitt and got get his input on the game - "It's really hard to put that into words. The feeling is unbelievable. You want to give your team a chance to win and that's what I tried to do out there."

The Blades didn't make it easy.

"At a point you get tired," admitted Hewitt, whose team was highly outshot. "Every time there's a break, you try to catch your breath, get some water. Sometimes you're trying to stall. When you're tired and dehydrated, you have to stay focused. I tried my best to do that."

The 1992 born rookie goaltender was named the deserving #1 star in the contest. Congrats on the win Matt. Keep up the hard work and constant drive in net!

For a full recap of the game Click Here.

Interesting to note, on average Matt Hewitt receives 37.57 shots against, second in the league to Seattle's Calivin Pickard.