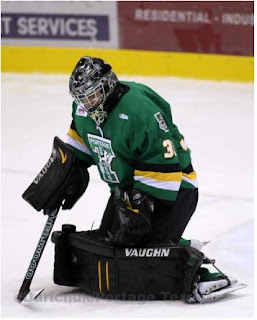 Goaltender of the MJHL's Portage Terriors - Jason Kasdorf, has been noticed by the NHL as they have him credited on the Central Scouting List for players to watch this season. The list is comprised of leagues around North America.

Kasdorf was born in 1992 and stands a staggering 6' 4 in net. Using his size to his advantage, he also exemplifies power to his movements and a stable controlled response to each save process.

On an interesting note for goaltenders, take a look at the Goalie Checklist that NHL Central Scouting grades by.

GDI Alberta's Jan Obernesser was also noticed from the AJHL this fall. Jan will be playing alongside Kasdorf in this years CJHL Prospects game for Team West.