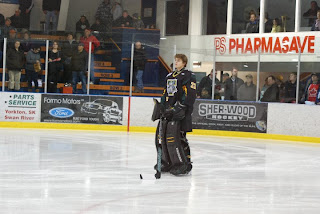 Towering over many goaltenders noticed by NHL's Central Scouting, Jason Kasdorf has climbed his way up through the rankings of the first half of the season within North American born goaltenders. After the Mid-Term Rankings, Kasdorf is ranked 21st.

Playing his second year with the Portage Terriers, Kasdorf has been noticed as one of the top goaltenders within the CJHL as the Terriers are currently ranked 9th among the top 20 ranked Junior teams across Canada. Also noted, Kasdorf was most recently selected to the MJHL All-Star team representing the Sher-Wood Division, being played on January 19th.