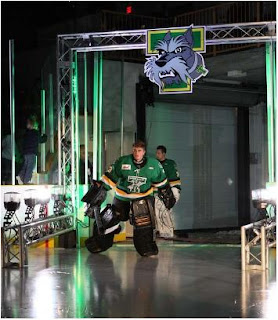 Four members of the MJHL have been named to Team West, which will play in the CJHL Prospects Games next month in Dauphin.

Jason Kasdorf (Portage Terriers) will be in net, while TJ Constant (OCN), Mitch Van Teeling (Dauphin) and Shane Gingera (Winnipeg Saints) have been named as forwards for the prestigious event.

Last year two MJHLers - Brendan O'Donnell and Peter Stoykewich - participated in the Prospects Games held in Winkler. Both were selected in the NHL draft in June, with O' Donnell selected by Tampa Bay, while Stoykewich was picked by Atlanta.

For this years current Players to Watch list from the NHL Central Scouting on Canadian Junior teams click here.