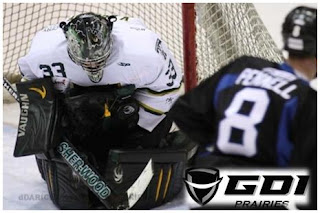 Portage Terriers’ Jason Kasdorf has been named this week’s MJHL Player of the Week.

The Terriers’ netminder is off to a strong start in the MJHL playoffs, posting two wins after two starts. The 6-foot-4 native of Winnipeg has turned aside 75 of 79 Swan Valley Stampeder shots.

Kasdorf, who was recently named to the MJHL’s second team All-Star squad, has been outstanding all season, reflected in his 24-10 record, 2.53 GAA and .912 save percentage.

The MJHL playoffs are well underway: