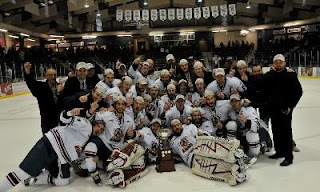 Dauphin Kings are No. 1!

And now the MJHL champs are No. 1 in the annual hockey battle known as the ANAVET Cup.

Kings, winners of 50 games over the regular season, flexed their hockey muscles Thursday night in a convincing 6-1 victory over La Ronge IceWolves before 2,100 rabid fans at . Kings won the best-of-seven series 4-1 and left no doubt they are one of the best teams in Canada, evidenced by their high ranking all season long in the Canadian Junior Hockey League.

Joel Danyluk made 50-saves in the loss for La Ronge. Dauphin outshot La Ronge 30-10 in the first period alone and 56-25 for the game. The Kings outshot La Ronge 153-68 in the three games played in Manitoba.

The Ice Wolves will head home for eight days and will return to Dauphin on May 1st for a 2pm local time date against the Central representative in their first game of the RBC Cup.

For more on the Anavet Cup Final click here.

The Kings now move on to host the RBC Cup next month. GDI-Prairies would like to congratulate both Joe Caligiuriand Brett Willows on their back to back championships!