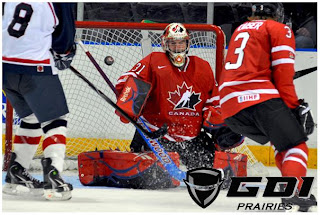 Krahn, arguably one of the best goaltenders in the MJHL, was once again brilliant in posting a 2-0 record last week. The Winnipeg native allowed only three goals on 64 shots on goal. He also leads all MJHL goaltenders in GAA with a sparkling 2.09.

Krahn, 19, has an overall record of 14-12 in 26 games played. His save percentage is a lofty .932. Krahn’s last win was a 2-1 shoot-out decision over Addison Division leading Selkirk Steelers. Krahn was named the game’s first star, while GDI trained netminder Joey Rewucki of the Steelers was named the second star.