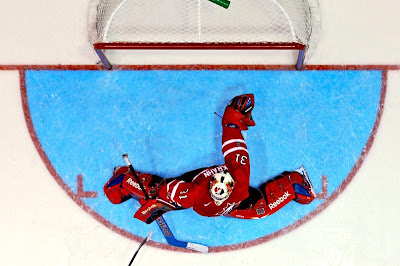 PENTICTON, B.C. – Grayson Downing and Dylan Walchuk scored third-period goals as Canada West earned its first win of the 2010 World Junior A Challenge with a 4-2 victory over Russia on Wednesday night.

Downing also added two assists for the Canadians, who won despite blowing a 2-0 second-period lead. The victory means Canada West will face Sweden in Wednesday’s late quarter-final (7:30 p.m. PT), while Russia will take on Canada East in the early game (4 p.m. PT).

Russia was able to get two point shots past Canada West Goaltender Matt Krahn, with one coming on a Russian powerplay and the other on their penalty kill. Krahn finished the game with 28 stops to help Team West get the win.

For more information on this game, and the rest of the tournament click here.