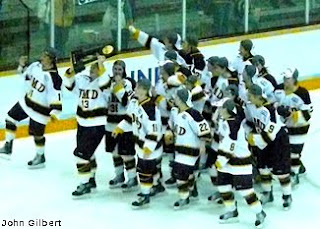 by John Gilbert, for WCHA.com

MINNEAPOLIS, Minn. – While Jessica Wong may be only a freshman at the University of Minnesota Duluth, she already has established a tendency to score huge goals. But she may never score a bigger one than she scored Sunday afternoon, when she deflected a Tara Gray shot into the Cornell goal at 19:26 of the third 20-minute overtime period to lift UMD to a 3-2 victory in the NCAA Women's Frozen Four championship game.

It was the longest game in NCAA Frozen Four history, surpassing the 2003 title game that UMD won by beating Harvard 4-3 at 4:19 of the second sudden-death overtime, at the DECC in Duluth. But this one, before 1,473 fans at Ridder Arena, may be a difficult record to surpass – it was only :26.4 seconds short of being two complete games. To read the rest of the article click here.

Lana Steck, part of the 09/10 Minnesota-Duluth Bulldogs Women's Hockey team, was part of 8 girls receiving All-WCHA Academic Team selections. Lana, a sophomore at Duluth, had previously played in goal for the St. Vital Victorias out of Winnipeg and had helped Team Manitoba's U-17 squad to a silver medal in the Canada Winter Games in Whitehorse, Yukon back in 2007.

Congrats Lana on your recent success!