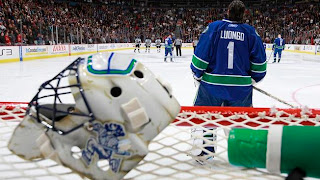 In years past, the fact that Olympic gold was not enough to shut up his naysayers would have eaten at him. Even if he wasn't on top of his game for Team Canada, it was good enough.

Not in the minds of some observers, however.

No matter. This is a different Roberto Luongo, a guy who no longer seems to take every barb to heart.

And you can point to a moment last month as a key in this change of attitude, one that brought clarity to the Vancouver Canucks goaltender.

Back in late April, hours before Game 7 of the first-round series between the Canucks and Chicago Blackhawks, Luongo, wearing a hoody and headphones, walked along the sea wall that separates Vancouver from the Pacific. With the hoody pulled up, passers-by had no clue it was him.

This was his way, he admits now, "of clearing my head, of putting things into perspective."

Asked what was playing on his headphones at the time, Luongo replied: "Well, it wasn't Celine Dion."

What it was, was a motivational tape, something he needed at that point. For more on this article by Wike Zeisberger Click Here.

Featured on CBC - Hockey Night in Canada - Roberto Luongo and his two younger brothers share the memories of their childhood, draft, olympics and the round one series against the Blackhawks.