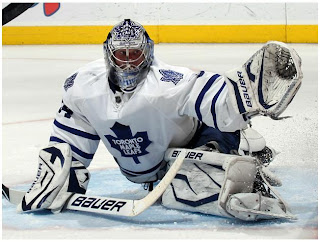 Playing out of Interlake for two years of his Midget AAA, James Reimer matured quickly - as he made the jump to play in the Western Hockey League with the Red Deer Rebels for three seasons. Progressively, within two years of playing Minor Pro he now has found his way onto a NHL roster spot with the Toronto Maple Leafs.

On Febraury 4th Reimer helped the Leafs beat the Carolina Hurricanes 3-0 posting his first career NHL shutout, and was also awarded the first star of the game. More remarkable this came on only his 9th game playing with the Leafs, recording 5 wins and 3 losses - with a save percentage of .940 and 1.96 GAA.

On Wednesday evening, the most important of Reimer's 27 save performance came on a Chad LaRose breakaway late in the second period. It ensured that the Leafs entered the final 20 minutes with a 2-0 lead. "He made a big save on Rosie," Staal said. "That would have cut it to 2-1 and we're feeling better going into the third period. But it was too late for us to get it going." This is something for every young goaltender to take note of! A goaltender that can provide a chance to win with those unnatural and unsuspected saves gives a driven boost of confidence to his teammates.

After reading over Wednesday's blog post, take a look at this game-saving clip below that displays Reimer's controlled depth, excellent patience, and layered coverage from the ice up.

This build of security is not only noticed by a goaltenders team, but is also respected by their coaching staff. Leafs coach Ron Wilson was cautious in his assessment of Reimer's play, but made it pretty clear who his two goalies are likely to be for the final 31 games of the regular season."I have no hesitation to play him or (J.S. Giguere)," Wilson said. "I think it's horses for courses right now." (NHL.com interview)

Reimer's emergence has been a big surprise in Toronto, where he's elbowed Jonas Gustavsson out of a job for the time being.

If your looking for a goaltender to look up to and shadow aspects of your game to then look no further. The Winnipeg born goaltender demonstrates a precise technical game that has been evident through his calm and controlled demeanor.

For more info and the full article on this game Click Here.