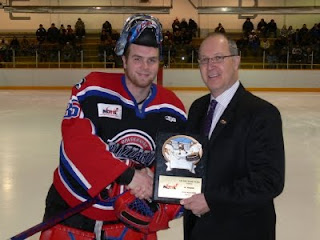 
Matt Krahn has received an overload of hardware this season along with most recently being credited as the MJHL's top goaltender and 1st Team All-Star. He has also been the leagues player of the week for three different times, due to his strong play in net holding the OCN Blizzard near the top of the competitive Sherwood Division. Krahner holds a 2.20 GAA and 0.927 Save Percentage within his 31 games played. Also noted from this year was his international play to help Canada West advance into the Semi-Finals and finish in 4th place in the World Junior A Challenge.

Jason Kasdorf should not be put on the back-burner. Kasdorf holds an outstanding season record of 23 and 10 as he helps hold the Portage Terriers in first place within the league at 83 points. Kazzy currently sits with a 2.48 GAA and 0.904 Save Percentage with 33 games played. Leading his team with consistency and a controlled presence in net, Kasdorf was noticed this year by the National Hockey League's Central Scouting. Towering over many goaltenders noticed he climbed his way up through the rankings of the first half of the season within North American born goaltenders and was ranked 21st after the Mid-Term Rankings. His play has also helped the Portage Terriers remain at 12th spot on the CJHL's Top 20 Rankings.

GDI would like to congratulate both goaltenders and wish them both the best heading into each of their playoff runs later next month.