The life of a hockey player has it's uncertainties, and for being a goalie, everything may be up in the air. With the salary cap in place the changing of the guard for teams happens year to year in the NHL, and what it boils down to for each teams decision....who knows.

In many situations we could place the blame on many poor playoff performances and in consistent starts throughout the season. On the flip side of this, with Halak getting traded to St. Louis that could be out of the question as Montreal gave him up to name Price their starter who was questionable last season and was the backup to Halak, who carried his team through the first two rounds. On the other hand, San Jose is reluctant to sign Nabokov to a deal due to his questionable play in his numerous non-cup winning playoffs with a team that has been looked upon as cup contenders for many consecutive years. 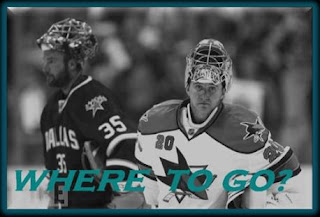 To read more into where goaltenders have been going and who is still on the free agent signing list for goaltenders take a look at the in depth article below from NHL.com.

A casual observer sees Evgeni Nabokov and Marty Turco headlining the goalie market and wonders how in the world the two big name guys are still unemployed? But this isn't all that strange as winds of philosophical change appear to be sweeping through the NHL's fraternity of general managers.

The salary cap system allows for only so many big contracts, and after watching a pair of bargain busters in Antti Niemi and Michael Leighton battle for the Stanley Cup last month it's become crystal clear that teams can win a championship in this League without spending through the roof on a goalie.

Instead of re-signing Nabokov or turning their attention to Turco, likely a less-expensive option, the San Jose Sharks Thursday gave a reported two years and $4 million to Antero Niittymaki. They plan on using him in a tandem with Thomas Greiss, and together they'll cost less than what Nabokov wants.

It's a leap of faith, yes, but it's a cheap one and it allowed Sharks GM Doug Wilson to re-sign Patrick Marleau and Joe Pavelski while saving money for Devin Setoguchi.

Tampa Bay GM Steve Yzerman chose to give a reported $1.5 million per year to Dan Ellis so he can duke it out with Mike Smith for the No. 1 job. Yzerman gave the big money to Martin St. Louis in a four-year contract extension and then signed Pavel Kubina Friday for two years at a reported $7.7 million.

The Atlanta Thrashers tabbed Chris Mason for two years at a reported $3.7 million to be the buffer for Ondrej Pavelec, who still might not be ready to assume a No. 1 job in the NHL.

Perhaps even more surprising, the Philadelphia Flyers may also be set in goal with Leighton and Brian Boucher coming back as a tandem. GM Paul Holmgren reportedly gave low-ball offers to Nabokov and Turco, and when they didn't bite, he gave Leighton a deal that will pay him $1.5 million for two years.

So where does this leave Nabokov and Turco?

To read the remaining part of the article and for a full view of the leagues goaltender line-up per team Click Here.