Nation On Guard With Visentin 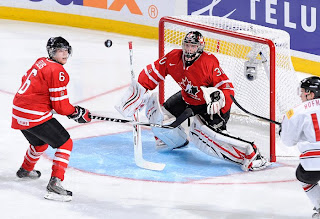 BUFFALO, N.Y. — The last time Canada had to switch goaltenders in the middle of a major international competition, it worked out pretty well, truth be told. That was in Vancouver, when Martin Brodeur lost the plot before our eyes and Roberto Luongo was handed the reins, along with the weight of the world.

The load placed on the slender shoulders of Mark Visentin Sunday was not quite suitable for Atlas, but it was a weight nonetheless. Two days after a 6-5 shootout loss to Sweden in which Canadian world juniors starter Olivier Roy permanently ended any questions of whether he was related to Patrick, Canada’s hopes in this tournament were placed with Visentin, a lean, pale, earnest 18-year-old from Waterdown, Ont.

He passed the test, if with trembling fingers. Canada defeated Switzerland 4-1 largely due to a 50-21 advantage in shots, and an almost incalculable advantage in the quality of those shots. Switzerland’s Benjamin Conz, twice undrafted unless you count the KHL, performed magic tricks. Visentin, a first-round pick of the Phoenix Coyotes, juggled fire.

There was the banana peel of a first goal, just 69 seconds in, as Inti Pestoni sent a puck dribbling along the red line that Visentin all but slipped on, and it slouched past his misplaced skate. The next Swiss shot was a no-hoper from distance, and Visentin flopped his glove at it, and eventually covered it up. On the rare occasions that the puck ventured into his orbit, Visentin often seemed to be fighting it like it was a live fish. On one play, when Canada was called for a delayed penalty, he sprinted for the Canadian bench before realizing his mistake.

“We actually touched the puck and the ref didn’t blow the whistle, so I thought it was the ref’s fault there,” he said, without guile. “I’m not going to skate to the bench if it’s the wrong penalty on a normal basis.

“It was a good skate, I got the legs going,” he half-joked. “Thank goodness they didn’t score. I kind of just gave my head a shake … I got kind of lucky that one didn’t go in there. That would have been brutal, and it would have been a killer for us. Breaks like that happen in a game, and you just have to keep your head up.”

Canada spent the rest of the game locating some sort of energy, and eventually overpowered Conz and his underpowered mates. Had the goaltenders switched ends, the guess is that Canada would have won 12-0 or so. There was never a moment you felt secure in Canada’s goaltending, though coach Dave Cameron said Visentin would start the semi-final against the United States Monday night.

“I mean, you draw your plan up with your team, and you dissect it, but the one thing you can’t practice or really know the response to is pressure,” said Cameron. “And I [thought when] he gave up that first goal, now we’re going to be able to see how he handles pressure. I thought he did quite well.”

They’ll drop the puck about 7:38 p.m. local time Monday night, and the rematch of last year’s final will be on, and young Mark Visentin of the Niagara IceDogs will face a new level of pressure. Before he reached the Ontario Hockey League, he never dreamed he would get this far — “I didn’t think I ever had the ability to play for the world juniors,” he said — but he watched hypnotized, like so many Canadians. His most powerful memory was of Carey Price standing up to the U.S. in the 2007 semi-final. He will get his chance to live up to that memory, starting now.

“I always try to picture myself making the big save at the end, but I’m not going to get ahead of myself,” said Visentin. “I think that’s where mental toughness comes in, and I’ve been trying to work on that a lot the last two years. I think I’ve come a long way in that category, and shaking that stuff off for me isn’t too tough … I thought I felt good today.”