New Rules Circling Around the NHL 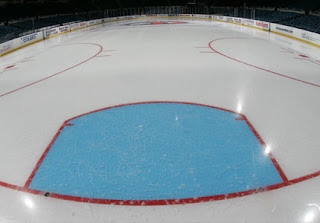 One thing they may discuss down the line is having goalies change ends for overtime -- leaving teams a long way from their bench when they're in their own zone. A number of odd-man rushes were created when the change was made during the afternoon session.

"It really opens the game up," said Dave King, an assistant coach with the Phoenix Coyotes who is helping out at the camp. "When you have a long change, if you make any mistake with the puck, it's dire straits. So I think that's one that the NHL will look at because I think it's got good potential to open up the overtime."

Other changes that drew some positive reviews were the use of blue-lines that are twice as wide -- giving defenceman more chance to hold the puck in the offensive zone -- and shallower nets that left more room behind the goal.

Among the more unusual things on display Wednesday:

-- Altering the ice surface to have three faceoff dots, one in each zone, down the centre of the rink.

-- Placing red mesh in the nets rather than white to give shooters a better look at openings.

-- Having the puck already on the ice for a faceoff, which is started by a whistle rather than the traditional puck drop.

To read the rest of the article at NHL.com Click Here.