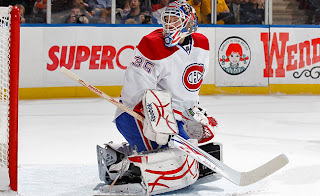 Is there a tougher job in major league sports than the seldom-used backup NHL goaltender?

Being a pro football kicker sure requires a thick skin and steely nerves; the line between hero or goat is thin and crossing it can be at the mercy of weather, even a bad snap. But at least kickers get their chances every game.

If you’ve backed-up for guys like Martin Brodeur, Miikka Kiprusoff or Henrik Lundqvist in recent seasons, you’re lucky to have seen action 10 times during a campaign. And when you do it’s generally against competition deemed inferior, so you better perform.

Imagine a work scenario where 90 percent of the time you were just a sounding board for others to bounce ideas off. But when you were asked for input once every few weeks, you were expected to offer up a winner. Substitute practice shots and dekes for ideas then throw in a rare starting gig and you understand something of the plight of a little-used NHL backup.

Montreal’s Alex Auld is one of those guys this season. The Canadiens have played more than 2100 minutes of hockey and Auld has been something other than a spectator for just 179 of them; less than nine percent of the campaign.

“It’s tough, but you can’t make any excuses,” Auld said when asked after a recent losing effort about staying on his game mentally and physically. “That’s the role I’m in and Carey has been fantastic. It’s my job to give him a rest when he needs it and make sure I give my team a chance to win.”

Carey is, of course, Carey Price, a top Vezina Trophy contender with more wins, and more minutes played, than any netminder in the league. That is something Auld may not have expected when he signed with Montreal over the summer.

The 29-year-old hasn’t played fewer than 24 games since becoming a full-time NHLer in 2005 and has battled for a No. 1 job as recently as two seasons ago. After the way Price was overtaken by Jaro Halak last season, Auld wouldn’t have been faulted for thinking he’d play more than he has so far this season. On a one-year, $1-million deal, it’s looking like Auld won’t have much of a chance to show what he can do before free agency hits again.

The native Albertan has shown well though, posting a 2.01 goals-against average and a .941 save percentage. But he has just one win in three games. And those losses are hard on a guy who is under pressure to win every time he plays.

“In some ways I (gave my team a winning chance) tonight and in some ways I didn’t,” a disconsolate Auld said after that loss. “I feel if just keep working and work on consistency, I’ll be able to put this behind me and move on and get ready for the next one.”

He’s certainly had time to do so. That loss was more than two weeks ago and Auld hasn’t seen a second of game time since. Let’s see if he gets a chance to play Sunday during an expected walkover of the Islanders. After all, it’s Boxing Day, when rare chances at victories (shopping and, in Auld’s case, hockey) are there for the taking, assuming you make the most of them.

This article was written by John Grigg, a copy editor and writer with The Hockey News, from his personal blog.

Alex Auld has trained previously under GDI, being mentored when playing previously with the Manitoba Moose and Vancouver Canucks.