Not the way Boucher envisioned the Final 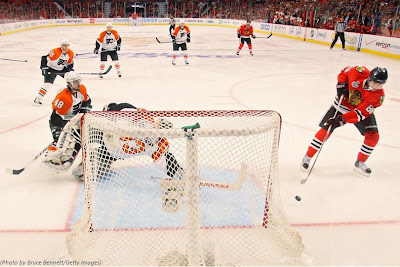 With the Blackhawks now up 3 games to 2 in the Stanley Cup Final, questions once again arise towards who will starts in goal for Phili in Game 6.

NHL.com had the chance to interview Brian Boucher after the game on his thoughts of how the Stanley Cup finals have been, and to see if he had any idea of how would start Game 6.

Some of the questions that were asked were:

Q: Do you have an idea who will start Game 6?

Boucher: I don't and I don't know that there is any issue here. You would have to ask coach about that.

Q: How do you feel your play was in those two periods?

Boucher: I needed to go and shut the door to give us a chance to win and it didn't happen. Physically, I felt fine, but like I said, three-goal leads are tough to come back from.

To read the rest of the article by Shawn P. Roarke Click Here.