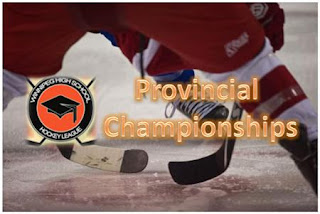 Sweeping the city and provincial high school hockey championships is not an easy thing to do.

If any team knows how to do it, though, it’s the St. Paul’s Crusaders.

Only three times has a school swept the city and provincial divisions in the last 14 years, but St. Paul’s did it twice. The last time was three years ago, and the Raiders were their victims both times.

St. Paul’s downed the Westwood Warriors 5-3 on Sunday night at MTS Iceplex to punch its ticket to Wednesday’s final of the provincial 4A tournament. They will meet the Oak Park Raiders in a rematch of last Monday’s city final, won 5-0 by St. Paul’s.