Olivier Roy Holds the Fort Down 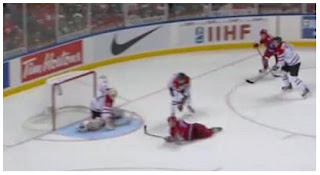 It was an uneasy start for Canada in their customary Boxing Day opening match at the World Junior Hockey Championship.

But powered by a lethal man advantage and a steadying improvement in net from Olivier Roy, Canada eventually took control of their game against Russia and won going away in a 6-3 decision.

Canada scored three times in five chances - including a pair of powerplay markers in the third period to break a 3-3 tie and finish the game much stronger than they had started.

For more on the World Juniors and this article Click Here.

For the full schedule of the World Juniors Click Here.