Oswald is MBAAA Goaltender of the Month for January 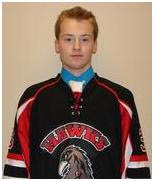 Because he spent part of the month with the WHL's Saskatoon Blades, Tyler Oswald played only four games for the Pembina Valley Hawks. Within those four games he turned in an impressive body of work and was awarded the Manitoba Midget AAA - January's Goaltender of the Month award.

Ozzy faced a total of 192 shots and came out of those four games sporting a save percentage of .910. For the season he has helped the Hawks achieve 7 of their 10 wins and has seen more rubber than the average goaltender with an average of 39 shots a game (1018 on the year).