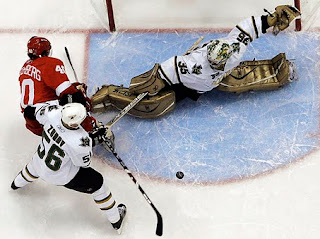 CHICAGO - The Chicago Blackhawks have agreed to a one-year deal with veteran goaltender Marty Turco, a move that means Stanley Cup hero Antti Niemi is gone.

General manager Stan Bowman says the team expects "immediate" contributions from the 34-year-old Turco, who's played in the NHL for 10 seasons, all with Dallas. He is a three-time all-star.

Niemi helped the Blackhawks win the Stanley Cup this past season after earning US$826,875 as a rookie. He was awarded a $2.75 million salary for next season by an arbitrator, putting Chicago in a tough spot to stay under the NHL's salary cap.

The deal with Turco was announced Monday. Niemi becomes the eighth player to leave the Blackhawks since the season ended.