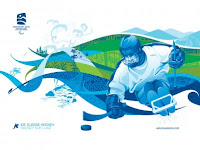 Parallel to the Olympics, the Paralympics have began. Currently Canada sits at 2nd in the medal standings with 7 medals total.

Team Canada's sledge hockey team opened up their competition on Saturday with a 4-0 shutout over team Italy. In their next two games they continued their triumph with 2 more victories over Sweeden with a 10-1 win, and defeating Norway 5-0.

Ice sledge hockey follows all the International Ice Hockey Federation rules, with a few small modifications. Instead of standing on skates, players sit on aluminum or steel sledges fitted with two blades. They grip two double-ended sticks, one in each hand. One end of the stick has a sharp pick that the players use to propel the sledge, the other has a curved blade to pass and shoot the puck.

For a full write-up on the sport click here.