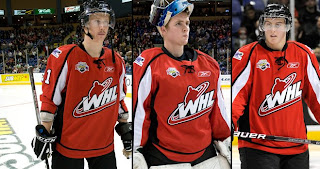 Winnipeg born Calvin Pickard was recently selected for Team WHL that will compete against Team Russia in the 2010 Subway Super Series.

The 2010 SUBWAY® Super Series will take place November 8 – 18 and marks the eighth straight year that teams of CHL All-Stars have competed against Team Russia in preparation for the World Junior Hockey Championships. The SUBWAY® Super Series is an integral part of the evaluation process prior to Team Canada’s final selection camp in December. This season, Canada will be competing for their 13th straight medal at the 2011 tournament in Buffalo, NY.

To view more on the Super Series Click Here.