Play for the Thrill 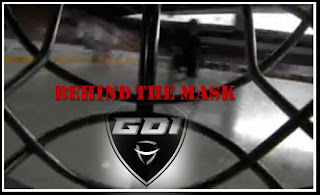 As every young goaltender currently makes their trek through playoffs, heading deeper into each series, the demand of each goaltender to be "perfect" becomes a notion for every team.

Whether you like it or not, strong goaltending will always be one of the main reasons why a team wins a playoff series. The aspects of a team as a whole is what can create such identities as having a powerful offense, or smart special teams that will pick apart other teams and run them down. But, in the end the concrete and ground of a team is built from the back-end up. A goaltender can see a low 10 to 20 shots in a game and still make a difference. The amount of shots can be cut down by how a goaltender controls and collects pucks or how active a goaltender is outside of the net moving pucks up ice. Through sixty minutes there may also be uncontrollable factors such as having your team being down players, guys double shifting, or mixed lines. Another thing to note is the difference in the complexity of scoring chances and how the opposing team sets up offensively.

With all this said, the goaltender that comes out on top is the one that takes ownership and is accountable. They consistently believe in their ability, and overcome the pressure that can creep up from various uncontrollable factors.

Looking to be a winner this playoffs? Believe. Believe in your capabilities in net. There is No Can't in your game. Believe by saying to yourself "I can" and "I will." Every goaltender that is a winner has the attachment from their mental and physical game to believing in their own abilities and constantly pushing their capabilities.

The goaltender that trusts their in net ability is the one that is under control. A section of Martin Brodeur's novel, Beyond the Crease, has a self-motivating paragraph that demonstrates a goaltenders personal belief within their game.

{He had scored earlier in the game, and then, with the score 2-1 and less than three minutes to play, he had a clear breakaway. I thought he was going to go backhand and top shelf, the same move he'd used on Montreal's Jose Theodore earlier in the year to win a much publicized shootout, but instead he snapped a shot high to my glove. It hit the edge of my glove, and stayed out. During the next TV timeout, he skated by and said, "Did it hit your glove?" I said, " Sorry, buddy. It sure did." (After) Elias scored with 20 seconds left in regulation to tie the game before - guess who? - Gionta won the game in OT. }