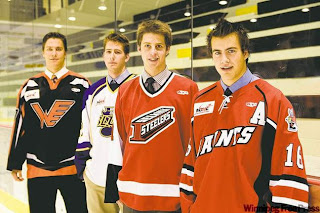 You couldn't call it an official poll, but it could certainly be considered a pretty accurate indication as to how Manitoba Junior Hockey League players regard the seventh-annual Old Dutch-MJHL Showcase Weekend which beings tonight at 7 p.m. and will wind up Saturday night.

All four players in attendance at the MJHL press conference, held yesterday to kick off the tournament, were in full agreement. They're aware of the professional and university scouts in the stands, but when the puck drops tonight at 7 p.m. for the game between the Neepawa Natives and Portage Terriers, the last thing on their minds will be the scouts.

All games in the Showcase are also regular-season matchups, so winning is the paramount objective. They can deal with the scouts later.

Selkirk Steelers goalie Joey Rewucki says nothing changes just because they are on display.

"It's the same game on the ice, so you prepare the same way you always do, go out and play, and everything will take care of itself."

Friday's schedule sees the Waywayseecappo Wolverines playing the Steinbach Pistons at 3 p.m., the Dauphin Kings facing the Selkirk Steelers at 4 p.m., the Swan Valley Stampeders taking on Winkler at 5 p.m., the OCN Blizzard versus the Saints at 6 p.m., and the Portage Terriers against the Blues at 7 p.m.

Steinbach and Neepawa open Saturday's schedule at 3 p.m., followed by Selkirk and Swan Valley at 4 p.m., Saints and Wayway at 5 p.m., Winkler and OCN at 6 p.m., while the Blues and Kings wrap it all up at 7 p.m.

To view the rest of this article from the Winnipeg Free Press Click Here.