Roberto Luongo gets pointers from Ian Clark, his goaltending consultant, at practice Friday. 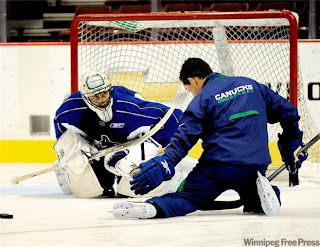 But the Vancouver Canucks netminder is feeling refreshed after a couple of days off, a session with goaltending consultant Ian Clark {Founder of the Goaltender Development Institute} and is eager to discover his game again.

"I'm a human being," Luongo said after Friday's practice that was preceded by 40 minutes with the Dallas-based Clark, who will be with him throughout the playoffs. "I'm not a robot, I'm not a machine. I'd like to be, but sometimes your mind and your body doesn't co-operate like you want it to... we're humans and we have bad days just like everybody else."

CLICK HERE to read more on this Winnipeg Free Press Article (27/03/2010) on Luongo, who looks to regain his form since the Olympic break.

Luongo played Saturday night against San Jose and looked solid in goal while making 26 saves on 29 shots, with goals that he shouldn't be largely faulted on. Vancouver lost the game 4-3, and looks ahead now to play Phoenix on Tuesday, March 30th. They currently sit at 3rd spot in the Western Conference standings, as they lead there division 5 points up on the Colorado Avalanche.

For last nights highlights check out the clips from NHL.com below.