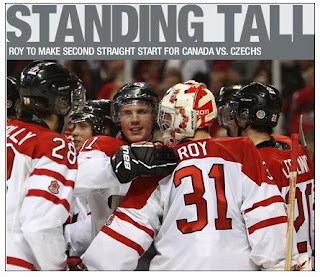 Olivier Roy will make his second straight start in goal when Canada takes on the Czech Republic at the world junior hockey championship on Tuesday.

The Acadie-Bathurst goalie made 24 saves as Canada opened the tournament Sunday with a 6-3 victory over Russia.

Coach Dave Cameron said that he liked that Roy gave the team a chance to win.

"It's going to be another great challenge," Roy said Monday. "They're a good team."

Cameron said he expects to put goalie Mark Visentin in a game "at some point." A likely date would be Wednesday against Norway.

Cameron has warned his team against getting too excited about their stirring win over a talented Russian team before a full house of mostly Canadian fans at HSBC Arena.

To read more on this article on TSN.ca - The Canadian Press - Click Here.