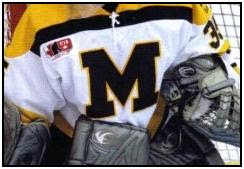 The Canadian hockey community puts pressure on their nations teams to strive for nothing but the best. Female hockey is no exception.

The U-18 Female Team Manitoba team has this same motive, and the goaltending tandem of Abby Ryplanski and Chantal Lischynski are the two to make it happen.

Both goaltenders have been together for several years playing out of Balmoral Hall on the highshools prep team and also on last years U-18 team. As both goaltenders competed on the National team last year they had a chance to see GDI founder, Ian Clark, in action helping out their idol Roberto Luongo, along with Andrew Raycroft, and Cory Schneider.

Ryplanski and Lishynski head down to Halifax for the Canada Winter Games and hit the ice on February 20th.