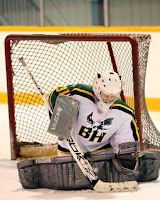 GDI Prairies would like to congratulate Abby Ryplanski who was recently selected to the Team Canada 2010-11 National Women's Hockey Team Selection Camp.

Hockey Canada announced Wednesday a list of 109 players identified for a strength and conditioning camp that will take place from May 25-30 at the University of Calgary.

The list of 109 players consists of 19 goaltenders, 33 defencemen and 57 forwards, many who have participated in Hockey Canada’s senior women’s, under-22 and under-18 programs.

In the past Abby had played at the 2009/10 U18 Hockey Championships where she had the chance to play in 3 games, combining for a GAA of 1.61. Currently playing on Balmoral Hall's Prep Team she competes in the West JWHL. Abby has trained consistantly with GDI Prairies over the past several years and is a strong student of the game works diligently on and off the ice.

For the full roster of the camp click here.