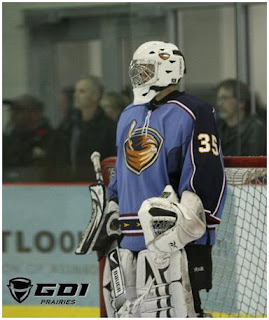 Winnipeg Thrashers netminder, Teagan Sacher, stood tall in net onto his fourth win of the playoffs.

Sacher shut down the AAA Midget Brandon Wheat Kings stopping 28 of 31 shots against on route to a 5 - 3 win that pushed the Wpg Thrashers into the Provincial Finals.

In a playoff like battle that had the fans on the edge of their seats, the Wheat Kings crashed the net on several occasions - attempting to jam pucks in with little results. Sacher was resilient to the traffic as he stopped a flurry of shots, including a pad stack jammer early in the frame of the third period to keep the game tied at 3.

Capping off a Semi-Final series win, the Manitoba AAA Midget Finals will see the Winnipeg Thrashers facing off against the Southwest Cougars. Game 1 takes place this Friday, March 18th, 7:30 at Gateway Arena.

For more info on this years playoffs Click Here.