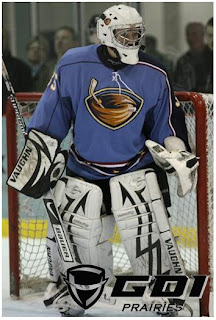 Wednesday night, Teagan Sacher helped bump the Winnipeg Thrashers into first place with a perfect 3 - 0 game against the Winnipeg Wild.

With Sacher's second shutout of the year he makes his presence in net evident to the league as he shuts the door on 28 shots against, and several quality scoring chances. The Wild were held scoreless on their six powerplays, which included two in the opening six minutes of the first, and were unable to capitalize in the second period on two odd man rushes that appeared to be open scoring opportunities.

Currently, Sacher holds a .917 save percentage with seven games remaining heading into the playoffs.


For the boxscore on the game click here. For a full recap and breakdown of action period to period click here.