Schneider Steps Up His Game With Manitoba 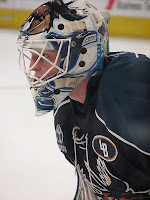 Schneider had been yanked from a Dec. 14 game vs. Lake Erie after getting torched for three goals on eight shots. With MacIntyre on recall to Vancouver at the time, Arniel's options in net for the next night's rematch were to go with an ECHL call-up or to put Schneider back out there.

"I called Cory into the office the next morning and kind of laid into him about what it takes to be a professional," Arniel recalled. "We had a real sit-down, he didn't do a whole lot of talking, I did most of it, and I proceeded to tell him that he didn't deserve it, but he was going back in the net that night."

After all the success Schneider had experienced during his college career, this experience marked a world of difference.

For the full write- up on Manitoba's goaltender click here.