The Role of Goalie Coaches Grows

The relationship between a goaltender and a goalie coach is more than just about finding ways to stop the puck. The off-ice part of the relationship is every bit as important as what happens on the ice. 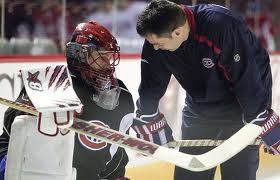 "I think it's really important you have a good relationship so you can talk about everything," Nashville goalie Pekka Rinne told NHL.com. "Sometimes it's not always about hockey. If something is on your mind, it's a good thing if you can talk about it with your goalie coach."

New York Islanders goalie Rick DiPietro has plenty of experience dealing with goalie coach Mike Dunham -- mainly because they played together in Dunham's final NHL season as a player in 2006-07.

"We have a great relationship," DiPietro said. "He knows my game, having played with me before he retired. It's always nice to have that extra set of eyes."

DiPietro considers Dunham a good friend and said it's nice to have someone in your corner throughout the season.

"It's huge. Especially with someone who has had the opportunity to play in the NHL," he said. "He knows the ups and downs and how hard it can be sometimes. It's nice to have a set of ears to talk to especially when you're struggling."

When it comes to on-ice relationships, Jimmy Howard of the Detroit Red Wings says it's very important to have a positive relationship with his goalie coach, Jim Bedard, who often is able to detect flaws in the Calder Trophy finalist's game.

"Goalie coaches are tremendously important," Howard said. "Goalie has become a specialized position and with a goalie coach, he can usually pick up if you're doing something wrong and he can help your game in the long run."

Offseason communication is also very important -- summer may be vacation time, but that doesn't mean goalies and coaches stop talking. The communication continues, and there is a certain level of trust on each side so that when September comes around, both sides can pick up where they let off last season.

"During the offseason, we talk on the phone and through e-mail," Rinne said. "It's more of a laid back version of the season. We have a good relationship and we talk about anything."