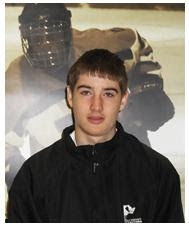 Widely accepted as the birthplace of hockey, what better place to host the 2011 Canada Games than Halifax.

GDI Prairie trained Alex Moodie is looking forward to heading into the Canada Games before playoffs. As the City Midget Winnipeg Warriors currently sit in 3rd place (Feb 4) the competitive atmosphere will be a big step to strive for a Provincial Gold and to build playoff rhythm.

Moodie idolizes goaltending greats Carey Price and the butterfly legend Patrick Roy. Taking pieces of his game, along with his in game competitive attitude and attention to detail when training, he hopes to crack a spot in net on a Junior roster in the future as he was drafted by the Saskatoon Blades and Winnipeg Saints.

The competition starts up on February 12th!